Following the example of his Grandfather and Father, Mohammad Mohseni embraces his responsibility to the well-being of his wide-spread family and the communities that have supported him.  Moving into the latter stages of his career and life, he has expanded the scope of the Mohseni Foundation, which he established originally as a bridge between the far-flung Mohseni family and to support the Arak community.  With this objective, he has established two philanthropic organizations: Mohammad H. Mohseni Charitable Foundation and Mohseni Trust for Family and Friends.

Today, the mission of the Mohammad H. Mohseni Charitable Foundation is to create a Canadian tax registered endowment for the advancement of health and education in selected communities.

The mission of the Mohseni Trust for Family and Friends is to serve as a connecting link for the extended Mohseni family, and to support health and education in selected communities connected to the Mohseni family, especially Arak, the family’s traditional home.

Among other projects, the Mohseni Trust for Family and Friends has for years supported promising students in advancing their education, and leads an annual campaign to provide new clothing for disadvantaged school children in Arak. 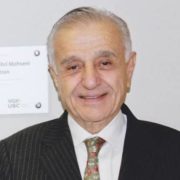 I have spent more than half of my life away from friends, family, and my Iranian homeland. I spent a few years studying abroad and many years working and living in Canada.  Despite the passage of years, and I daily reminisce about my homeland and my birthplace, Arak. I have never forgotten the beautiful and verdant Arak of my growing-up years, its gardens, meadows, and mountains, which were full of wildflowers during spring and around its many creeks. For the youth of those years, all the conditions of happiness and growth were present. At school and home we learned about Sa‘di, Hafez, and Firdawsi, and we read and memorized selections of their poetry. The dialect of our people was musical and included terms found in classical works like the History of Bayhaqi.

During the first years of my separation from Iran, I recalled my grandfather and his farsightedness. It was due to his rationality that I and many members of the extensive Mohseni family have acquired our educational success. Thus in recognition, I decided to pay my dues and, to the extent of my ability, assist the hardworking and knowledgeable people of Arak. The Mohseni Foundation was established for this purpose. To introduce the activities of the foundation and to promote closer connections among its family members, for eleven years (2000-2011) we published a newsletter called Bayn-i Khodimoun (Between Us).

I hope and expect that our journal Diyar, the first issue of which you are viewing, facilitates research and scholarship on the culture, history economy, and literature of Arak and Iran’s Central Province. It further explores the linguistic peculiarities and the distinct dialects prevalent in the region. It explores the lives of national cultural, historical and political dignitaries who emerged from this region during the past century and contributed to Iran’s cultural and political reconstruction and to the development of Persian literature.

I am thankful to Dr. Mohamad Tavakoli-Targhi, who has accepted my invitation to cooperate with the Mohseni Charitable Foundation. I am also grateful to all scholars who are focusing on the study of the areas mentioned above. It is my hope that Diyar will contribute to the proliferation of local and regional research on other parts of Iran. I further hope that Diyar provides a venue for closer collaboration between the University of Toronto and the University of Arak via the Mohseni Research Institute in Arak.

These journals were introduced in order to establish a bridge between the Mohseni families and to support the Arak community.

Between us journal archive